It's true. It turns out you can, in fact, add C-style for loops into Python. The way to get there however, was long and painful all the way to the end.

Regardless, I've learned many things (some of which I hope nobody ever uses in production), and I'm here to share with you all the gruesome details. I hope you find it helpful (or at the very least, entertaining).

The Path to get there

I had to try 3 different approaches in order to finally get to the image that you see at the top. And hence, I've sectioned the blog into 3 parts:

But before all of that, let's answer the big question: "why?".

In the beginning, I had a dumb idea:

"Can I possibly put the 3-statement for-loop from C into Python?"

I mocked up an idea that I thought I could make, and posted it on twitter: 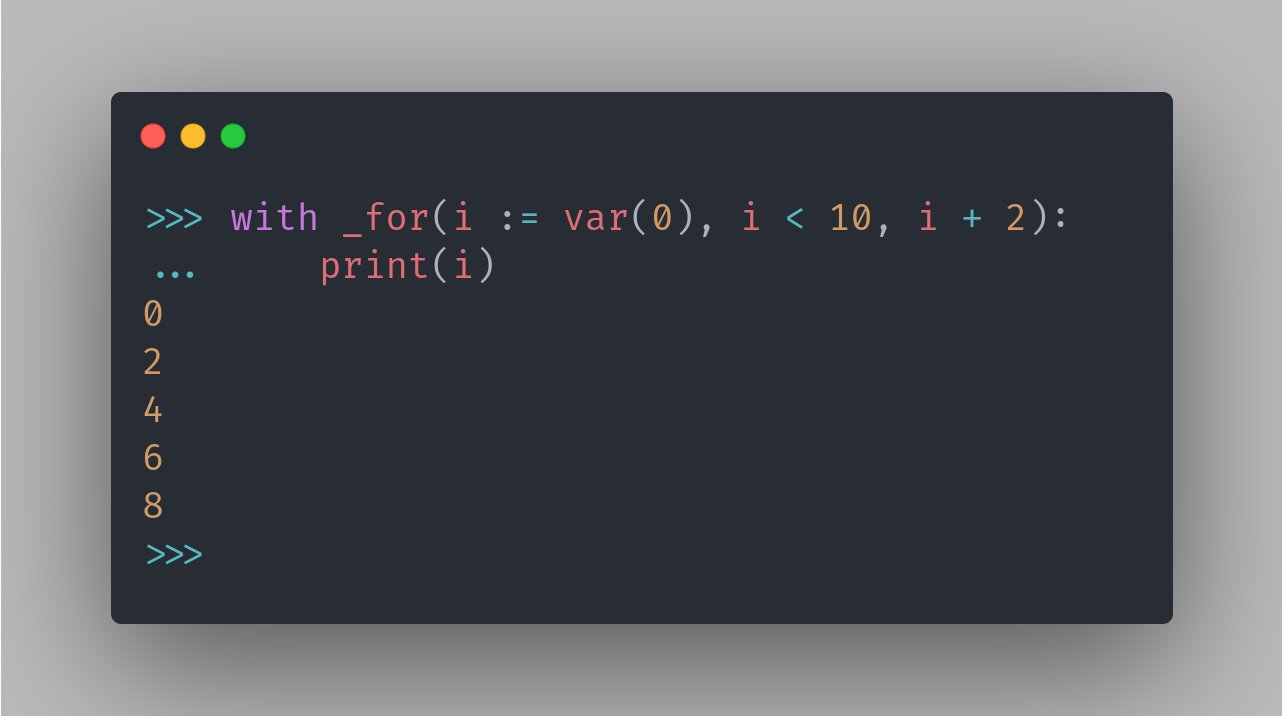 ... and immediately, I got some intriguing reactions:

So I decided it'd be worthwhile to try and make this a reality. Simple as that.

I wanted it to look like a regular for-loop from C as much as possible:

But there's a couple big problems:

Hence, I started with this rough idea:

Yeah, it's not the greatest syntax of all time, but you have to be confined to Python syntax when writing Python (... or so I thought, more on that later).

The first argument i := var(0) is what will initialise our i variable. But, it is no ordinary variable, mind you. For the second and third argument to work, i < 10 and i + 2 should behave as the condition and increment part of the for loop. Thankfully, By overriding functions like __lt__ and __add__, we can customize how this i variable behaves when we do these comparisons and additions.

Now, all that's left is to implement this _for and var thing.

We want var to be able to do these 3 things at least:

So I started with a simple var class:

I then added comparison support, by making a _Comparison type, and implementing __lt__, such that doing i < something stores that information:

This _Comparison objects stores all information about the comparison, and this gets passed down to the _for() function.

We'll do the same for the increment part:

Alright! Now to the next part.

_for() must return a context manager, because we're using it with a with statement, so we'll use the contextlib.contextmanager decorator to quickly make one:

And this way, we should have all the information needed:

Let's do the looping now, shall we?

It works! Let's try a couple other cases:

We're not actually executing the body of the for loop as many times, we're simply printing out value, which is hardcoded. The body is still only executed once. That's not what we wanted at all!

Let's try to hack around this.

Nope. Since there's only one block of output, that shows there's no separate code object for a with statement's body. Compare this to a function:

You can see there's two disassemblies, of two separate code objects. So that's a no-go.

But hey, we can still access the stack frame...

And I could read the code object inside it...

f_lasti also tells us which of those bytes (instructions) was last executed, which means the code after it must contain the body of the with statement!

So if we could just extract the bytecode and then run the body manually N times, we could...

Here's one (obvious) piece of advice -- if your current approach devolves into you trying to rewrite the Python interpreter, you have messed up.

Let's backtrack, and try to think of some other possibility.

Part 2: Making our own language inside Python

Thanks to another such project that I made in the past, I learned the fact that you can add arbitrary semantics into Python -- essentially, if something is valid Python code, you could transform it to suit your needs. All you need is this one simple trick: AST manipulation.

Here's what I mean. You can take any piece of code:

You can parse it (as long as it's valid "Syntax")

You can change what the code actually means:

And you can generate code back out of it:

Which you're free to execute as you please. This example is really simplified, but with enough transformation, you can turn any Python code into anything else.

So let's do exactly that.

What we want the following code:

We can break this down into three distinct parts:

Let's do them in that order:

We'll be using an ast.NodeTransformer class which helps us find and replace AST nodes inside the code easily. We'll be implementing its generic_visit() method, to find all AST nodes that have a body, and find cursed _for blocks inside them.

If you want to deep dive into what's going on here with NodeTransformer, generic_visit etc., check out this post.

Here's the code for self.is_cursed_for_call, it just checks if the function is called _for:

We have yet to see how self.replace_cursed_for(stmt) works. In essence it just has to return a list of two nodes:

Here's the function, simplified and documented for explanation:

To show it in action, here's the transformation it does:

It works! We can finally use this to run our cursed for loops!

If you wish to try this out yourself, the complete code (with much better error handling) is present in cursedfor.py in the GitHub repository, and you can download it and run the REPL.

I was finally done with this project, but it always stayed in the back of my mind. I just felt that I hadn't done it justice.

And so, a couple months later, I got to know of a much, much better way to do this. And it was everything that I could've ever wanted.

I stumbled upon this library, which tries to add braces to Python instead of indentation. And although the implementation is questionable, it gave me exactly the tool I needed to finish this project: codecs.

What the heck is a codec?

A "codec" in Python refers to the tools that let you convert the text encoding of a source file into a Python string, and (in case of source code) can run the code.

A lot of pre-built codecs exist, such as utf-8, cp1252, and ascii, so that people can write their code in whichever file encoding they prefer to use, and Python will pre-process the file into the text format that it understands, before trying to run it.

There's just one tiny detail: You can write your own custom codecs.

So here's the new idea: What if instead of AST manipulation, we manipulated the source text directly before it runs?

Yeah, I know, it's probably a bad idea. But I think it can work. And you can't stop me, so you might as well see what I have to say.

The approach in my mind is pretty simple:

Let's try it out then.

To create the encoding, we first need to implement a transformation function. I chose to implement one that works on a list of Python source lines. Here's the boilerplate:

Now for the details on how we match and replace for (x; y; z): lines:

So that's how I did it. And to my own surprise, it works!

Is this useful, at all? Probably not. Is it cursed? YES.

Can this knowledge be useful in making actually good Python packages? You tell me!

The current method does work, but it breaks if you try to give it nested loops:

This is because we don't transform the body of the for-loop, which we should.

Simply call _transform_cursed_for() on the collected lines of the inner body, before appending it to the new body:

The complete code for this approach, with much better error handling, etc. is present in this folder in the GitHub repository.

The making of perhaps the most cursed Python package

There's just one more thing left to do: Make this an installable package.

And honestly, that part of the process is a lot more black-magic hackery than what we've even seen so far. I basically copied what this other project called future-fstrings does, and you can watch this video if you're really curious.

In essence, we need to register this encoding at Python's startup time. And we do that by creating a .pth file which must be stored into the site-packages folder, which will get auto imported when Python starts up.

And with that, our package is complete.

You can now install the package:

And run your cursed python files with a # coding comment at the top:

Can you do this in a REPL? Can you debug the output? Absolutely! Check out the repository's README for more info.

And that's it from me. I... hope you learned something useful? I sure did.